The clinical studies carried out showed that the Laser Pallas 311 nm is much more effective for the treatment of Localized Vitiligo than ultraviolet light and than the 308 nm Laser Excimer.

He vitiligo It is a disease that affects the pigmentation of the skin and appears as spots of a lighter color than normal. It is not contagious and it is treatable.

Vitiligo is a depigmentation disorder, which results from the selective loss of meloncytes in the skin and mucosa. 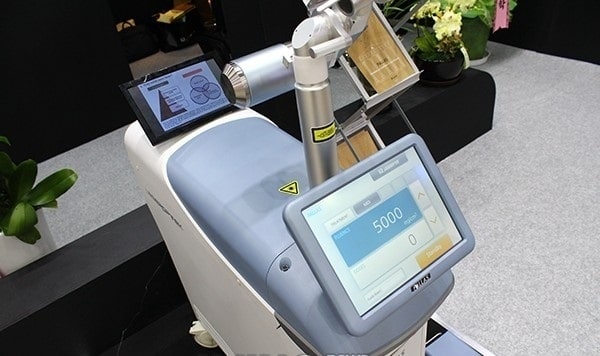 It affects 0.5-2% in the population and remains a major challenge in dermatology.

There are some medical conditions that may be associated, especially thyroid disorders and autoimmune phenomena.

Early treatment, as soon as it is diagnosed, is very important to stop its evolution.

The phototherapy, including therapy with psoralen plus ultraviolet A and narrowband ultraviolet B (NBUVB), has been the mainstay of treatment for vitiligo. However, phototherapy shows limited responses in certain patients and produces radiation from unaffected areas which has the following adverse effects:

With laser treatment these undesirable effects would be avoided. Localized vitiligo can be selectively treated and would be the ideal indication for the treatment of children.

The laser has been shown to produce a faster pigment.

It requires fewer sessions than phototherapy.

Some patients begin to repigment after 6 sessions of treatment, while others do after 4 sessions..

Laser treatment is generally started at 100–300 mJ / cm2, depending on the body site and skin phototype.

Features of the Pallas laser

Erythema (redness) is generally asymptomatic, does not hurt the patient, and occurs 24 to 48 hours after treatment. This erythema, redness is considered ideal to obtain repigmentation.

Post-treatment erythema is frequently observed, while burning, blistering, and itching are occasionally observed.

Although the exact mechanism of action of the laser in vitiligo is not fully understood, ultraviolet B (UVB) light appears to contribute both to the modulation of the immune response and to the migration and proliferation of melanocytes.

The most advanced technology and a prestigious medical staff are the guarantee of a serious and effective approach to the treatment of Vitiligo.

A frequent question for patients, especially when faced with vitiligo is whether laser is a safe treatment.

Well, the Monochromatic light has a very favorable risk / benefit ratio in which the main side effect is redness, which is usually transitory and will be resolved in less than 24 hours.

The presence of itching, stinging, blistering or reactivation of herpes simplex can occur in very specific cases.

Instead the phototherapy localized performed with the Pallas Laser accumulates little radiation, reason why the long-term side effects, should be diminished.

Treatment by session It is $3.000 with pallas laser. It is recommended to one to two weekly sessions for a minimum time of 12 weeks.

If you have any medical questions, send an email to [email protected]  . In this mail Only medical consultations will be received. Inquiries about shifts, payments and administrative issues are not attended.

By phone on Monday, Thursday and Friday from 8 a.m. to 3 p.m. at the following telephone numbers.

Book a consultation at our medical centers located in Caballito, Belgrano and Pilar

We await your medical consultation