What is it granuloma gluteale infantum?

Child's gluteal granuloma is a rare form of napkin dermatitis in which there is reddish purple nodules in the napkin (diaper) area of babies. It was first described in 1891 as 'vegetative bromidism' due to its appearance after the use of current ointments containing bromide [1,2].

The term 'granuloma' is an inappropriate name, since histological Examination of the childhood gluteal granuloma does not reveal any granulomas [3]. 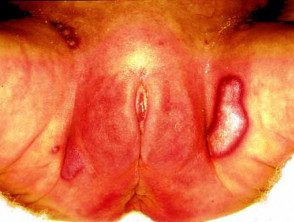 Who gets gluteal granuloma in children?

Infantile gluteal granuloma usually occurs in babies 1 to 9 months old. It is more common in boys than girls. [4].

What are the clinical characteristics of childhood gluteal granuloma?

Childhood gluteal granuloma is characterized by asymptomatic firm erythematous or violaceous Nodules Nodules are found in inguinal folds, in the convexities of the buttocks, and less frequently, in the scrotal area and medium thighs

The nodules are often ovoid in shape and typically 0.5 to 4 cm in size, with the long axis parallel to the skinfold lines.

What are the complications of childhood gluteal granuloma?

How is childhood gluteal granuloma diagnosed?

Infant gluteal granuloma is suspected based on the clinical history of the infant patient and findings on examination of the baby's napkin region.

The diagnosis can be confirmed by biopsy and histological evaluation. A dense dermal inflammatory perivascular infiltrate of lymphocytes, neutrophils, eosinophils and plasma cells are observed, with overlap parakeratosis and hyperplasia of the epidermis [6].

Which is the differential diagnosis for childhood gluteal granuloma?

Other forms of napkin dermatitis can be differentiated of childhood gluteal granuloma due to clinical characteristics.

Less common conditions that may require consideration include:

What is the treatment and outcome of childhood gluteal granuloma?

The affected baby's napkin region should be cleaned, kept dry and hydrated. Candida albicans it should be treated with a topical antifungal agent. The nodules return spontaneously within 1 to 2 months without any active treatment, often leaving an atrophic effect. scar.