Important advances in laser technology allow us today to have the possibility of erasing a tattoo of painless and scarless. This possible due to the new Helios III laser device, which makes the task quicker and more enjoyable. This device has multi-fractional laser technology and adds to its optimal results the advantage of not leaving undesirable consequences.

How do you erase a tattoo?

The ink from a tattoo is found in the dermis, which is the deepest layer of the skin. The passage of time causes the ink to fade and creates a washed out or fuzzy appearance.

The Helios III laser uses a beam of light strong enough to completely remove tattoos. The laser only acts on that chromophore, and its energy divides these ink or pigment deposits (sun spots, melasmas, freckles, tattoos) into thousands of fragments that will later be reabsorbed by macrophages of the organism (cleaning cells) or will migrate to the surface from the skin to be removed.

The system manages to directly and exclusively impact dark tissue without affecting skin tissue. Helios III emits a beam of 81 microdots with high intensity of light energy. Said energy produces the fragmentation of the stain until its reduction into microparticles, which are reabsorbed by the body or eliminated through skin porosities.

The revolutionary thing about this system is its exclusive Q-switched mechanism micro fractionated with DEO technology, unique in the world, which divides the pulse into a train of extremely fast pulses that prevent the surrounding skin from being affected by laser energy, in the same way that you can run your hand over the flame without burning if it is done very quickly.

Removal of any type of tattoo

While darker colors respond better to treatment, devices that include a variety of wavelengths can perfectly handle the full spectrum of colors seen in modern tattoos. Tattoo removal treatment can be performed on any part of the body. The color of the design to be erased affects the type of laser frequency used in the treatment. Only white and flesh-colored tattoos should not be treated, because these colors with the laser darken permanently. 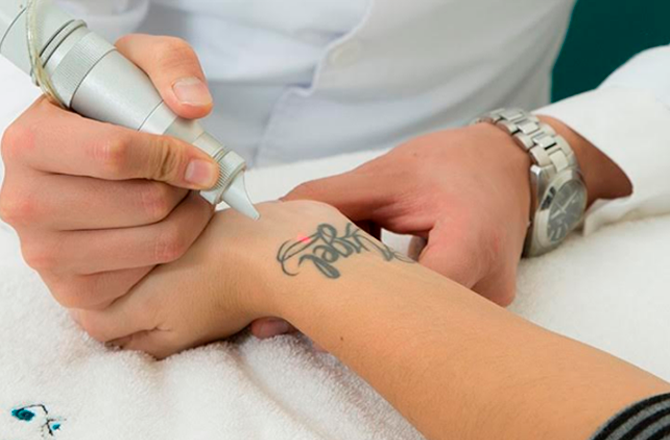 The larger the tattoo, the more sessions it will take to dissolve the ink particles. Depending on the type of ink used by the tattoo artist and the depth where I place it, it can make the treatment lasts approximately 6 sessions. A few tattoos require less, many others require more sessions. Sessions can be every 15 days or more. There are no problems if you stop the treatment for a while, the action of the laser and the absorption of the pigment continue to work.

Laser tattoo removal is an effective procedure, and in most cases people can get rid of their tattoo completely (or stay very close).

The number of sessions required for a complete result varies according to the tattoo, but changes are noticeable from the first session. Helios III It is based on a neodymium laser (Nd Yag) whose adjustable wavelength allows the specialist to choose the coloration of the pigment to be treated. This process may take a few weeks.

"There is a large turnout of patients, mostly young women, who want to remove a tattoo,"

Dr. Ricardo Hoogstra, Former chief of Plastic Surgery at the José M. Penna Hospital in the city of Buenos Aires and director of Hoosgtra Medical Centers.

How many sessions are necessary to remove a tattoo?

On average, it takes about 8 sessions to remove a tattoo. There are tattoos that due to their chemical composition and or the depth placed, have more sessions and their number is difficult to pin down.

Professional tattoos / tattoos, made with an applicator gun, based on inorganic inks (iron oxide, chromium oxide, etc.) and synthetic organic ones (aluminum, calcium and barium salts), are usually more difficult to break and microfragment. That is why professional type tattoos / tattoos require more sessions.

It is an ultra fast laser, the patient experiences less pain and the session lasts less time. The results are seen faster and colors can be eliminated that with another type of Laser it was not possible. The Picosecond Laser is of high power and has more possibility of removing pigment such as blue, green and yellow, pigments that until now were almost intractable.

The Picosecond Laser breaks the ink into smaller particles than the other Lasers, this facilitates its elimination through the skin and lymphatics.

The light energy of the Picosecond Laser passes through the skin without damaging it and impacts the ink, which explodes and breaks down into tiny particles. Most tattoos disappear in fewer sessions than with other equipment.

As always, HOOGSTRA CENTROS MEDICOS invests in the most advanced technology and a team of more than 10 highly trained dermatologists perform the procedures.

Some patients may notice redness, burning, sometimes superficial blisters, and color changes after treatment. The less energy used by the dermatologist, the less chance of unwanted effects., but in turn generally involves a greater number of sessions. With the picosecond laser we can treat any tattoo on any body area.

The result is that there are no edema or scarring, and therefore no recovery period is required. The person can immediately resume all activities after treatment. It does not require that the treated person interrupt their social or work activity.

Unlike other laser treatment methods that leave scars in the treated area and require a few days and even weeks of rest after treatment, the fundamental advantage of this system is that it avoids any risk of epidermal damage. Indeed, Helios II achieves its results without producing edema, scar or damage in the outer layers of the skin. Scarless tattoo removal is possible, and has no side effects. This is why it saves inconvenience and does not require that the person treated interrupt his social or work activity.

Can I re-tattoo myself on the area where a laser tattoo has been erased?

Yes, this is possible as long as the skin is healthy, and the patient is not being treated with isotretinoin or has not had bleeding disorders or viral infections. Sometimes, the patient wants to remove only part of the tattoo (a detail, a date, or a name) to tattoo another motif instead. In these cases We recommend that the new tattoo is not performed until the skin fully recovers of the last session of the laser treatment.

Results: Before and after

How much does it cost to erase a tattoo?

Book a consultation at our medical centers located in Caballito, Belgrano and Pilar

We await your medical consultation