Carotenaemia (American spelling carotenemia) is the term used for excessive carotenoids in the blood. Strictly speaking, excessive carotene in the skin should be called carotenoderma. The terms xanthoderma (yellow skin) and carotenosis are also used. Carotemia is generally harmless.

Carotenoids are yellow in color, lipid-soluble compounds found in red, orange, yellow and green vegetables and fruits. They include:

Carotenoids are a normal part of our diet and contribute to the normal color of our skin. They also help protect our skin from sunburn.

Carotenoids are precursors of an essential vitamin, vitamin A or retinol. The conversion takes place in the mucous membrane cells that line the small intestine and liver. Pancreatic lipase enzymes, bile salts, fat and thyroid hormone help the conversion of carotenoids to vitamin A. Carotenoids are eliminated from the body by sweating, tallow, urine and feces.

Although mostly safe, excessive ingestion of the carotenoid canthaxanthin has been associated with yellow deposits on the retina, visual defects and other adverse effects.

Carotenamia is usually due to excessive intake of carrots, squash, and / or other yellow and green citrus vegetables and fruits. It can also be due to taking nutritional supplements. Is called primary carotenamia and appears several weeks after increased ingestion of the responsible foods.

However, carotinemia with a normal intake of carotenoids can be a sign underlying disease. This is secondary carotinemia. Examples include:

In rare cases, a genetic carotene defect metabolism It can also lead to carotemia, even when carotene intake is normal.

Carotenamia can occur at any age, but it is more common in young children fed large amounts of commercial baby food preparations. These foods often contain carrots, squash, squash, spinach, and sweet potatoes, all of which are rich in carotene. By cooking, pureeing, and pureeing, these foods make carotene more available for absorption. Carotenamy has also been found in vegetarians or food fads who consume too much of carrots and oranges.

What are the clinical characteristics?

the sclerotic (white outer lining of the eyeball) and mucous the membranes (eyes, mouth, nostrils, etc.) are not affected by carotinemia; the presence of yellow sclera usually means that there is an increase in circulation bilirubin and is known as jaundice. 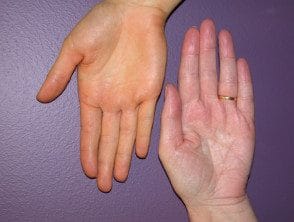 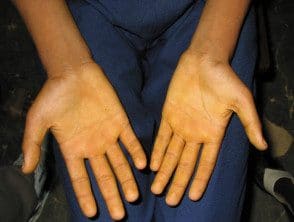 What is the treatment for carotenamia?

Skin color can return to normal with dietary modifications. Patients should be informed which foods contain carotene and not overeat. Although serum carotene levels may return to normal shortly after restricting carotene intake, the yellow color of the skin may persist for a few months due to accumulated carotene in the tissues.

Beta-carotene is an antioxidant and is sometimes used to treat photosensitivity disorders like polymorphous light eruption and erythropoetic protoporphyria. However, its use has not been supported by controlled clinical trials, nor has it been found to reduce the risk of sunburn or prevent skin. Cancer.