What is Noonan? syndrome?

Noonan syndrome is common autosomal dominant disorder associated with mutations in the Ras / mitogen-activated protein kinase (MAPK) pathway and is one of a group of conditions that are collectively known as RASopathies.

Noonan syndrome is characterized by:

Noonan syndrome is also known as:

A 12-year-old girl with Noonan syndrome. 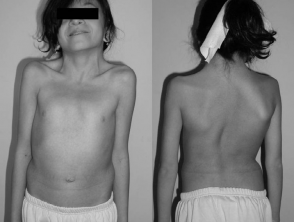 Noonan syndrome is caused by mutations in the genes associated with the Ras / MAPK cell signaling pathway, which is required for normal cell division, proliferation, differentiation and migration. These mutations lead to loss of regulation of cell growth and division.

the genetic The cause of Noonan syndrome is unknown in up to 20% of cases.

What are the clinical features of Noonan syndrome?

Noonan syndrome both sexes and all races; 50-70% of people with Noonan syndrome are short. Birth weight and length are usually normal, but growth slows over time. This is believed to be associated with abnormal levels of growth hormone.

Noonan syndrome presents with distinctive facial features, such as:

Other clinical manifestations of Noonan syndrome include:

Congenital heart disease is common in most cases of Noonan syndrome, being the most common defect pulmonary valve stenosis.

What are the complications of Noonan syndrome?

Hypertrophic cardiomyopathy it is common in individuals with critical congenital pulmonary valve stenosis.

People with Noonan syndrome have an eight times greater risk of developing hematological malignant tumors, the most common being leukemia.

What is the treatment for Noonan syndrome?

There is no specific treatment for the syndrome. Any complications such as heart disease should be monitored and treated according to symptoms, signs, and the results of investigations.